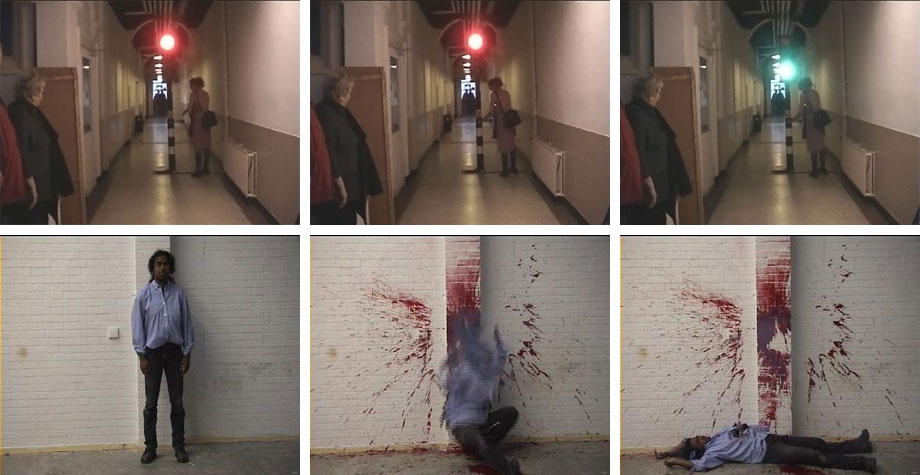 PUSHa/b is an interactive installation by PIEK! made for the exhibiton ‘Move iT’ organised by The Sandberg Institute in NIMK, the Dutch time based intstitute for unstable media.

At the entrance of the exhibtion there is a traffic light with a typical ‘traffic light button’ attached to it. By pushing that button, the light turns from red to green, and turns red in about 30 seconds.

At the end of the exhibition, on the third floor, one sees a video projection of a man standing in front of a white washed wall. In front of this is a big red alarm button attached on a white supporting base. If someone pushes that button, one heares the sound of a shot that is fired and sees the man standing gets shot in the stomach. Blood is splashing against the wall, and the man collapses.

The installation is shown in Amsterdam @ NIMK, in Kyoto @ Kyoto Art Centre and in Groningen @ Academy Minerva

Review in ‘Het Parool’, a dutch newspaper, Januari 2 2001.
… at the entrance PIEK! placed a lifesize traffic-light. PUSHa is the title of the work: push the button and you’re allowed to walk on. A simple action wich influences the course of events. In the first case maybe not so very radical, but the traffic light is just one half of the installation. PUSHb is situated on the third floor. In a narrow space next to the toilets, is the artist projected, literally with his back against the wall. Also in here is button within reach. But, instead of deciding over walking or not walking, this one decides over life and death. By pushing the button the artists stomach explodeds with a lot of noise. With this installation PIEK! makes a very direct, confronting experience, wich wouldn’t work without the interference of the visitor. The interactivity of this work of art succeeds in making the distance between spectator and art much smaller…
Herien Wensink

A registration of PUSHa/b in the exhibition ‘Kyoto X Amsterdam’ in Kyoto, Japan