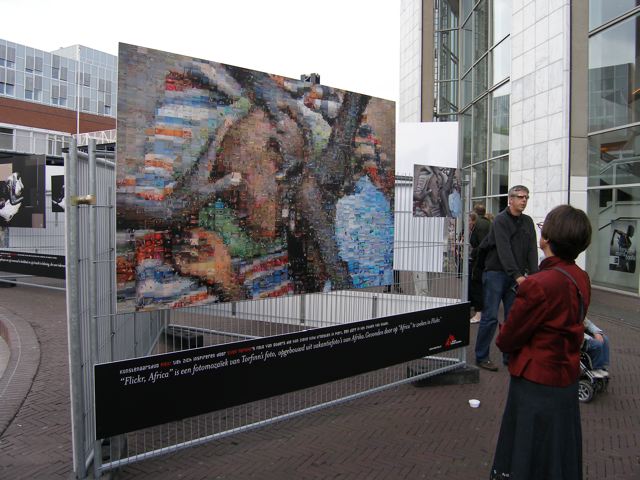 Cry of Distress: How pleasant can we make it?
A traveling exibition
for Medecins Sans Frontieres / Doctors without Borders

PIEK! was asked by Doctors without Borders to contribute a work for their traveling exhibition ‘Cry of Distress: How pleasant can we make it?’
PIEK! made a ‘Flickr/Africa’ photo mosaic of Sven Torfinns’ photo Parents comforting their sick child in Pieri, a village in the south of Sudan.
The mosaic is made out of hundreds of holiday photos taken in Africa.
The images are found in Flickr, with the search queries Africa and Holiday.

Worldwide 33 million people on the run, who is still touched by it?
Artists are inspired by emergencies.

Everyone knows the images, yet they have little or no impact is more, the stereotypes that seem interchangeable. To break 13, we have a number of Dutch artists in the broadest sense – from fashion designer to architect, from graffiti artist to artist – invited to participate in a special exhibition.
We asked the artists to select a picture from our photo collectieâ of renowned and award-winning news photographers often made in MSF’s projects – and this picture as a source of inspiration to use your own artwork. The artworks are accompanied by the original photographs.
Herewith we – and artists – the excite: to take a new look and to look (again) to be moved by images of emergencies in the world.

MSF is an independent medical relief organization that victims of disasters, wars and epidemie’n helps. MSF was awarded the Nobel Peace Prize for both clinical work and acting as an advocate for people and communities in need.