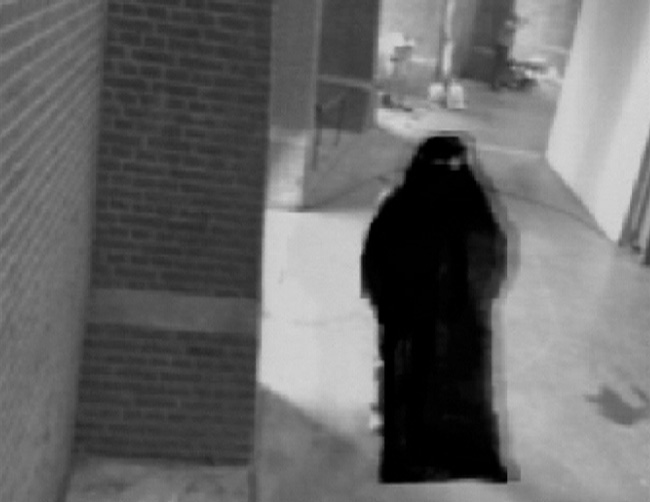 Three surveillance cameras hang in the exhibition space, with two monitors set up like a surveillance station.
The video feeds are actively processed live and a silhouette in the shape of a burqa is superimposed over those under surveillance with only the eyes visible through a transparent rectangle.
The effect is the inverse of a black bar over the eyes to anonimyze someone and a commentary on racial profiling tactics used in video surveillance.

The gaze of the cameras does not fall equally on all users of the street but on those who are stereotypical predefined as potentially deviant, or through appearance and demeanour, are singled out by operators as unrespectable. In this way youth, particularly those already socially and economically marginal, may be subject to even greater levels of authoritative intervention and official stigmatisation, and rather than contributing to social justice through the reduction of victimisation, CCTV will merely become a tool of injustice through the amplification of differential and discriminatory policing.”
“an instrument of social control and the production of discipline; the production of ‘anticipatory conformity’; the certainty of rapid deployment to observed deviance and; the compilation of individualised dossiers of the monitored population.”
“The unforgiving Eye: CCTV surveillance in public space” Dr Clive Norris and Gary Armstrong of the Centre for Criminology and Criminal Justice at Hull University, UK.

“What we have been able to show is that CCTV didn’t reduce crime – if anything it has increased – and it didn’t reduce fear of crime. If anything there was a slight increase in anxiety.”
Prof Jason Ditton of Sheffield University.